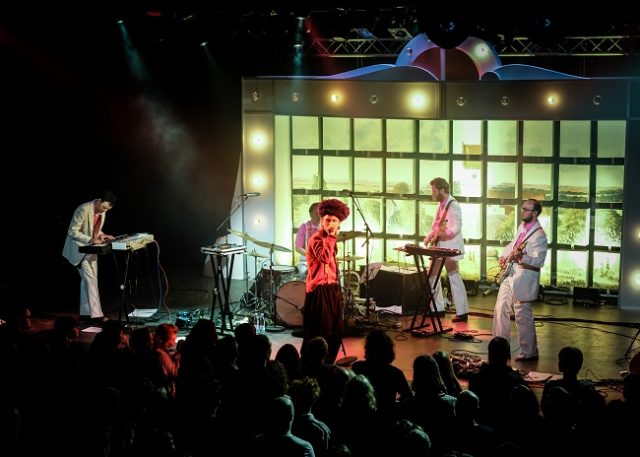 Being a non-native Danish speaker at a Bisse show must be one of the most confusing places on earth to exist. Luckily however, with my recent certificate of language proficiency, ink still virtually drying, I headed out to what would become the biggest challenge of my grasp of both language and indigenous culture that my adopted Denmark had to offer.

Before I come over all squishy and patriotic though, I should preface this with the fact that I was only aware of Bisse’s penchant for outrageous costumes, absurd dramatics and wunderkind talent. I tried to keep an open mind – however in the past a recipe of over-ambition and hype have only let me down. I was fully prepared to just see the freak show with no substance, go home, and rip it apart in the safe comfort of my sitting room.

I found my place at the balcony wings and took note of the strange stage that had been brought in. The usual band instruments were strewn about in front of a game show set – a retro “Wheel Of Fortune” type thing, with the letters puzzled together as a typical country church perched on a hill that could be nearly anywhere in the provinces of Danmark.

The show began with the band shuffling out in matching white suits, pink shirts and bow ties. They launched into a cheesy retro-funk type jam and the voice of an announcer was heard in full force over the Tannoy announcing the beginning of the game show. Were we really doing this?

Bisse came out clad in a Cossack-type uniform clutching a blue shaggy beefeater looking hat. The music turned from 80’s gameshow to somber very quickly as he reverently began his program with an ode to Denmark – as if giving an invocation to us.

What followed was from what I gathered from hard-core fans, 3 newer numbers, never played before. They ranged from post-punk tinged lunacy (The Associates, The Chameleons) to Jacques Brel-esque lyrical cabaret, Wagner-esque romanticism (complete with nationalism) and wafts of just campy posing and vamping in the spotlight.

Whatever Bisse himself was morphed into had to have an effect on his demeanor as well. The game show carry-on and costume shifts however in my book were a side show, or even lubricant to what was actually happening here tonight: a music concert.

Having not really studied up on Bisse’s catalogue, I was only vaguely aware of what to expect. What I did hear pretty much smashed my Dane brain into bits and accessed words and turns of phrases that I could not possibly have learned in language courses. I couldn’t help thinking that instead of the old ‘tried and true’ lyrics that are bashed into us from text books – The C.V. Jørgensen, Kim Larsen, TV2 and even Natasja and Peter Sommer we had to study and define – really, I might have benefitted more from whatever the fuck this was. The young upstart has already taken the crown in many young minds as being the king of Danish lyrical poetry.

Bisses rapid-fire lyric poetry does put one in mind of many of the old guard of Danish lyrical song poets. His delivery is somewhat similar at times to Jørgensen, however it’s not as wistful and trite as any of the sages of yore. It lives and breathes and attacks you – even fucks you, right out of your comfort zone under the familiarity of the mother tongue. The musical trojan horse though is the fact that often, the libretti to this horror show comes wrapped inside familiar sounding songs. On the other hand – there are moments of sheer terror – symphonic and atonal passages that can only come from the demented mind of someone who has studied the modern classics, and is willing to pervert them for his own gains.

As incredible as this all sounds – and the sheer spectacle of Bisse dressed as a priest while actually giving people communion on stage and forcing “Bisse Christ Blood” on us is naturally outrageous, it serves to detract a little from the actual music. Maybe that sometimes is not entirely a bad thing. Maybe its slight of hand.

As prolific as Bisse is – and with a huge well of influences to draw upon, as well as composer chops, a lot of what occurred musically is not exactly new ground to me. I’m sure much of the audience are not familiar with say, Scott Walker’s 90’s and beyond modernist pieces, or even Brel, Klaus Nomi, Stravinsky’s “Sacre Du Printemps” and Arvo Pärt. The familiarity for much of the crowd comes from pillaging “Lodger” and “Scary Monsters” era Bowie, taking the piss out of Danish gangsta-rap, and other ecumenical type references. When however, you do blend the operatic, modernist, pop and put it in the nutri-bullet with costumes and spotlights and then kick it on to the set of a full-feathered game show – now we’re talking something we haven’t seen.

So Bisse’s kryptonite might be that he feels the need to wrap his lyrical genius up in this freakshow. It could also be his best move though – to have fans come to see all of the bombastic pseudo-shock value buffoonery and then hit them with such heavy lyrics and momentary blasts of high-culture via his conservatory halls. Aren’t you interested, though?

Bisse Finished off the 90-minute body of the show with actually completing the “Wheel Of Fortune” concept. A winner was found, and the lucky lady was treated to a bouquet of roses and an oversized comedy voucher for “A years use of Bisse concerts”. I wonder how that feels – to be either awarded – or depending on how you look at it – damned to attend this show every weekend across the kingdom. My brain was full.

So, was it an experience I won’t forget soon? Yes. Was it a final final test of both my Danish proficiency and knowledge of culture and history? Probably. Was it worthy of a higher score than just “meh” or the curse of the 4/6 rating? Oh yes.